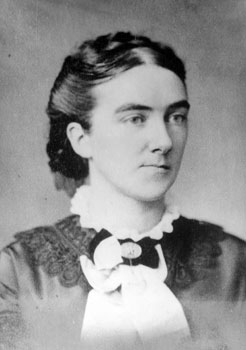 Ellen was determined to have a part in the World’s Fair in Chicago in 1893.  She was invited to be a  part of the Women’s Building and  cook in a demonstration kitchen.  However, she said she failed to see that any of her work was strictly women’s work and she wanted no part of it.  After attempts to locate in the Liberal Arts Building failed because of the possible fire hazards, she was determined to construct her own building.  This was a small frame, white building with barely room to seat 30 people. She decided to call this the Rumford Kitchen after Massachusetts native Benjamin Thompson later called Count Rumford.  He was the first to label nutrition a science in the early 1800s. The kitchen was open for all to view and the tables had the menu choices with nutrient values for each food item.  The walls were lined with posters filled with the latest nutritional information.  Since she had been bounced around before she established her own building, she was not operating the full length of the fair, but only for a few months.  Miraculously, they were able to feed over 10,000 during this short time.  Unfortunately, there was nothing about her kitchen in any advanced fair publicity and little written about it even as an historical event after the fair.  What did survive, however, were the many handouts called Rumford Kitchen pamphlets. Patrons of the kitchen were invited to take these with nutritional information.

Today, Rumford Baking Powder is owned and produced by Clabber Girl of Terre Haute, Indiana which also houses all the archives from the original Rumford Chemical Works in  East Providence, RI.  In their collection are many of the scientific instruments that Eben Horsford used to develop his special chemical baking powder.  See the web link in the blogroll at the left for a direct link to Clabber Girl Museum.